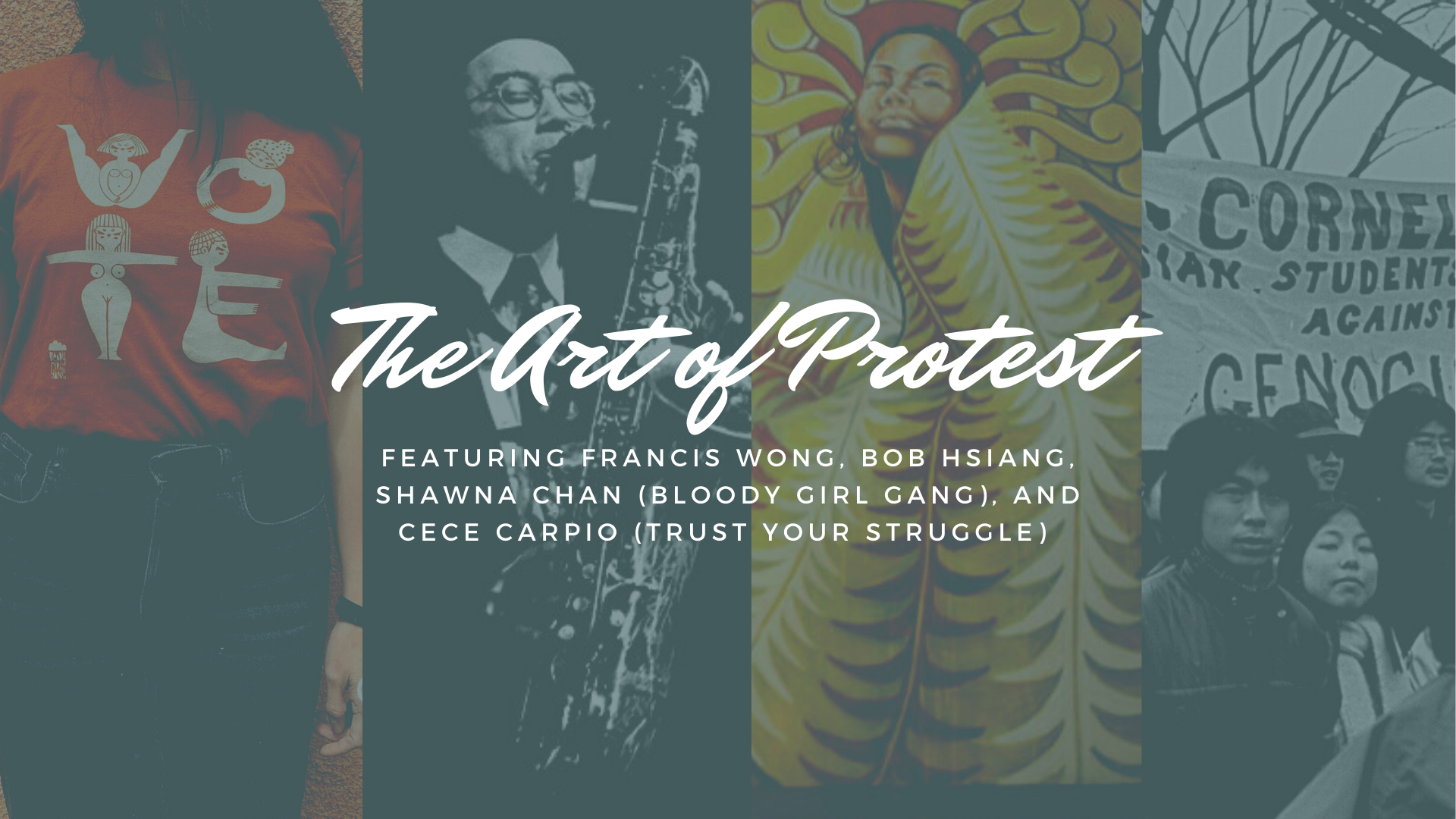 The Art of Protest

With a pandemic in its second wave, social movements occurring all over the country, and elections gearing up, our country is in dire need of art that has a message. Loud art. Bold art. Meaningful art. We are in need of art that speaks volumes. Our panelists are emerging and veteran artists who have turned their message of protest, strength, and unity into successful careers. Making their work accessible to the general public, they capture a unique space and stance on entrepreneurship and activism, all while staying true and active within their communities.

Francis Wong, considered one of "the great saxophonists of his generation" by the late jazz critic Phil Elwood. A prolific recording artist, Wong is featured on more than forty titles as a leader and sideman. For over two decades he has performed his innovative brand of jazz and creative music for audiences in North America, Asia, and Europe with such with such luminaries as Jon Jang, Tatsu Aoki, Genny Lim,William Roper, Bobby Bradford, John Tchicai, James Newton, Joseph Jarman, Don Moye and the late Glenn Horiuchi. Wong's imaginative career also straddles roles as varied as performing artist, youth mentor, composer, artistic director, community activist, non-profit organization manager, consultant, music producer, and academic lecturer. Key vehicles for his work are Asian Improv aRts, the company he co-founded with Jon Jang and as a Senior Fellow at the Wildflowers Institute.

Bob Hsiang has been servicing the art community for many years. A self taught photographer, Hsiang has volunteered for many community organizations in New York and San Francisco. After moving to San Francisco, he became a professional photographer. His main clients were newspapers, performing arts, corporate event planners, individual artists and craftspeople. His work has been exhibited by Kearny Street Workshop between the 1980's and 2010. He also maintains a small studio where he photographs portraits and objects for business and art marketing.

Shawna Chan was born and raised in Singapore of Peranakan descent and is now based in San Francisco. Shawna works in animation and design and is an educator in color theory and design. She is happiest when creating illustrations and mixed media art inspired by her love for nature, botanicals, everyday life, as well as decorative art and childhood nostalgia. She spends downtime practicing eco conscious living, watering plant babies and is working towards being an owner of a tiny home. @BloodyGirlGang by Shawna Chan is a brand dedicated to being an illustrated voice for women's empowerment. Every piece is handcrafted, created with intent to inspire conversations around the movement we are in.

Using acrylic, ink, aerosol and installations, Cece Carpio tells stories of immigration, ancestry, resistance, and resilience. She documents evolving traditions through combining folkloric forms, bold portraits and natural elements with urban art techniques. Her work is influenced people who have been invincible in order to share their thriving presence, to show the dignity and power of their existence. Cece has produced and exhibited work in the Philippines, Fiji Islands, Cuba, Mexico, Guatemala, Nicaragua, Italy, Norway, Ireland, United Kingdom, India, Guam and throughout the United States. She can often be found collaborating with her collective, Trust Your Struggle, teaching, and traveling around the world in pursuit of the perfect wall.